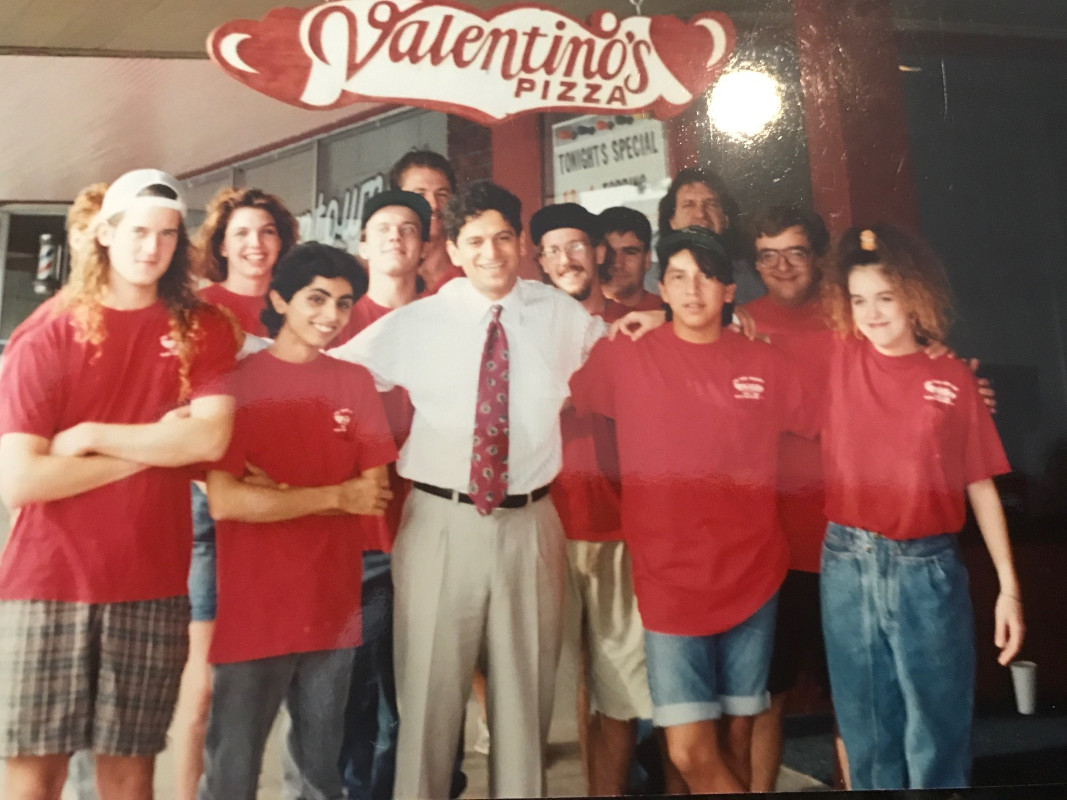 A junior at Southwest Texas in 1980 Bijan Afkami, after leaving his resume at every business on the Square, was hired at Pizza Plaza for $2.25.hour and 25 cents per delivery. With that incentive Bijan became the “fastest delivery driver in the west,” Bijan later said. Pizza Plaza opened in 1972 and had seen better days and while the staff were loyal, the owners had allowed the business to become massively in debt to the point that they could no longer operate. Bijan saw an opportunity and he offered to pay off all the owner’s debts if he could take over the business. In the spring of 1981, Bijan inherited Pizza Plaza’s classic recipes and opened as Valentino’s. Why Valentinos? Bijan was brainstorming on a name with his brother; his brother had a cat named Valentino. They liked it!

Bijan owned Valentinos until 1993, but it was in the first few years that he practically lived there with loyal staff, some of whom he inherited from Pizza Plaza and played an essential role in Valentino’s next chapter and continuity over the next two decades. In those first years Bijan joked that on dates with his future wife involved her ridding along with him while delivering pizza. Early on, it was Dan Clemts who helmed Valentinos up until 1986. Dan, was also a former employee of Pizza Plaza and actually trained Bijan when he started. Somewhere along the way, they cooked a pizza without sauce and just cheese, cut in thin slices, and covered in garlic butter. Valentino’s Cheese Breadsticks quickly earned cult status, and is by the far the most talked about menu item by locals throughout it’s 4 decade history.

Between 1986 and 1993, with Dan and Bijan both not actively involved in the restaurant, the business suffered and sales declined dramatically. Bijan offered for Dan to come back and to sell him the business, and he did, and that saved Valentinos from closing.

Dan put in hundred- hour weeks with his right hand, Phillip Kelso, to bring Valentinos back to greatness. During his time they introduced happy hour and their famous $2 pitcher night. In the early 80s nobody was putting ranch on pizza, but people slowly started to demand it. Val’s original ranch recipe was such a hit that people wanted ranch on everything, and under Dan’s ownership the Chicken Bacon Ranch Pizza was born.

In 2005 Dan sold Valentinos to Andrew and Beth Moore, who were the first to introduce live music to Valentinos, but they sold the business to Carter and Bobbi Hill just a few years later. While not much is known about the last owners regarding their story or the operation during Valentinos’ last decade, it’s clear from talking to countless former staff that Valentinos history and culture was about the employees and the employees ran Valentino’s; it was their restaurant as much as whoever owned it during whichever decade. Because of Valentino’s, hundreds of people made life long best friends, met their future spouses, and still get together for annual reunions. Former staff in addition to former owners, too many to name, provided passionate accounts of their time at Valentinos to complete this story.

Valentino’s closed for Thanksgiving in 2018 and quietly never reopened. Bobbi and Carter Hill sold the building as well to a new owner who was prepared to lease it to a new business that would probably not be pizza or even a restaurant. That’s when he approached Cody Taylor and Harlan Scott who had just opened Industry in 2018 which was actually named after their love for the service industry. Their 20-year friendship and love for the industry began in college working at an iconic restaurant that changed the lives of locals and it’s employees, just like Valentino’s did. Valentinos today is not a reopening or a remodel of the old Valentinos; that was impossible to do. Valentino’s today pays tribute to a restaurant that served so many…and sold pizza too.